This is the Second Part on "International Silence and the Role of the OPCW" and has the OPCW itself as its focus.

by Firaz Dağ
in All News, Editorial, Headline, Kurdistan, Middle East, News, Your Silence Kills
A A
0 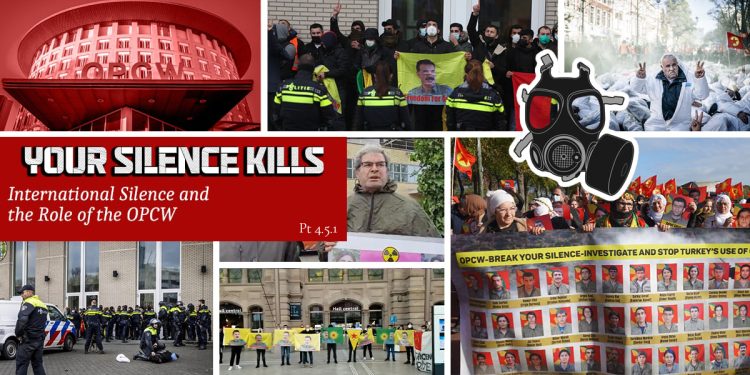 NEWS CENTER – This is the Second Part on the topic of “International Silence and the Role of the OPCW” and has the OPCW itself as its focus. Why is the OPCW silent in the face of chemical weapons war crimes, why do chemical weapons still exist at all if they are banned? Questions that easily arise when one looks at the current situation in Kurdistan. What is certain is that states do not abide by their own laws if they are not in line with their interests.

4. THE ROLE OF THE SUPPORTERS

4.2 THE ROLE OF THE IRAQI GOVERNMENT

4.4 WHERE DO THE WEAPONS COME FROM?

4.5 INTERNATIONAL SILENCE AND THE ROLE OF THE OPCW

The Geneva Protocol that was used in 1925 could not stop the use of chemical weapons, and so in the 1980s, as part of a conference on disarmament, negotiations began on a comprehensive treaty that would require all countries to destroy their chemical weapons stockpiles. During this time, Halabsha was attacked with poison gas, making it clear to the world public once again that chemical weapons were a threat to humanity.

Although 193 countries have signed the convention, North Korea, South Sudan, Egypt and Israel are not part of it, and there are also the actors who act apart from state control bodies, such as secret services and gangs. It has also become known how the gangs of IS have used chemical weapons several times and these gangs are supported by the Turkish occupying state until today. Especially the proliferation of small quantities can hardly be monitored by the OPCW.

With the technical developments, the possibilities of producing chemical substances and especially chemical warfare agents in other ways are also changing, so the OPCW has to respond to these technical advances in chemical and biotechnology, but this also requires new ways of monitoring the ban.

Chemical agents that can be hidden under pesticide chemistry, while warfare agents themselves can be produced quickly before military use. Chemicals can be produced more cheaply and in a more environmentally friendly way than with the traditional production methods of the time. There are possibilities to produce chemical warfare agents with biochemical processes, experts observe new industries which in principle would be able to produce chemical substances. However, the OPCW controls selected chemical plants, not biotechnological plants. These plants can be much smaller than classical chemical factories and can also produce at completely different locations.

In addition, there are the new substances of so-called psychoactive substances, such as fentanyl or fentanyl derivatives as they were used in the Moscow theater, which put people mentally and physically, at least temporarily out of action. Their effects range from unconsciousness, hallucinations, disorientation, paralysis, and at high doses, death. Massive respiratory problems can occur and respiratory arrest can result. But such psychotropic agents are considered “non-lethal” which is why the Chemical Weapons Convention allows them in police operations, as well as tear gas and pepper spray. These substances are derived from drugs and can incapacitate people even at low levels.

It is clear that for the OPCW to fulfill its mandate and achieve success, political will is needed, but many states lack exactly that. This also includes the fact that the OPCW’s so-called suspicion inspections have never been used, although it would be an instrument that would be important, especially with regard to Turkey’s current chemical weapons use.

But as has been made clear in previous sections, no state has yet agreed to believe the multitude of documents and evidence. As the journalist Steve Sweeny has already pointed out, this is due to the policy of the imperialist states to denigrate the PKK freedom movement as a “terrorist organization” and thus to legitimize their policy against the PKK and the Kurdistan freedom movement, which has nothing to do with law or humanity. This policy starts with the listing of the PKK in the list of so-called “terrorist organizations” and thus its ban in many imperialist states, continues with the international conspiracy that was implemented against the chairman Abdullah Ocalan, in which different states participated and until today neither a legal procedure nor basic rights for Rêber APO made possible, who has been under severe isolation torture since February 15, 1999.

The situation continues with the occupation of Efrîn, Girê Spî and Serêkanîyê, the deliberate support of the gangs of IS, which made a name for themselves by massacring the Kurdish people in the cruelest way, and targeted drone attacks, which know neither law nor justice and with which leaders of the Kurdish people and the freedom movement of Kurdistan are murdered and ends with massive bombings and attacks with chemical weapons, phosphorus bombs, thermobaric bombs and tactical nuclear weapons against the guerrillas and the massive environmental destruction of the nature and forests of Kurdistan.

Already in the past, the Turkish occupying state attacked the guerrillas with chemical weapons, murdered in the cruelest way the Kurds who knew neither law nor justice and who did not betray their homeland and their people because of their welatparêzî. But until today, the Turkish state was not stopped at the international level, did not have to account.

While the world is debating Russia’s war crimes in Ukraine and all are demanding investigations and measures against possible chemical weapons use and the use of tactical nuclear weapons against Russia, the fascist AKP-MHP government in the shadows is taking advantage of the lack of attention to implement its project of total war against the guerrillas and the Kurdish people with massacres and war crimes to establish its power for years to come.

This process shows once again that international law does not apply to revolutionary movements, does not apply to oppressed peoples and minorities who have neither a state nor the means and possibilities of the imperialist powers. Law and justice is just measured with double standards and does not have the basis, as it is touted by the ruling powers, to protect the world and humanity from crime and injustice.

If it is politically wanted, whole states can be destroyed and nullified on the grounds of war crimes or crimes against humanity, targeted killings are legitimized without any trial and invasions of other countries are also considered legitimate. If it is politically not wanted, because the criminal state in question is e.g. part of NATO, it is kept silent, covered and not looked at, while in the background it is still supported with various means, in order to finally raze this rebellious people, with their decades-old resistance and will for freedom, to the ground once and for all, in order to establish their own system once and for all.

The fact that the OPCW, despite all evidence, demonstrations and protests, remains silent and has not done justice to its task in the past to the extent that it should, is precisely due to this political will, which is related to the interests of the imperial states, which are solely interested in maintaining, expanding and establishing their power more strongly, instead of protecting human rights and nature, as they pretend to do.

Steve Sweeney also made this clear in an interview with the following statement:

One may wonder why then institutions like the OPCW were actually established, why such agreements were created, why all this trouble?

It is just not all black, white. Of course, there have been important attempts to stop these dangers, of course, there have been important measures to put an end to this, but to the extent that the states involved are convinced and willing to put their power interests behind the protection of mankind, to the extent that only such measures can be crowned with success and be established. This is also connected with the current political situation, in calm phases such measures are taken, which are then however quickly eroded with the strengthening of the threats of war.

The fact that the OPCW still exists today has to do with the policy of trying to make people believe in something that has nothing to do with reality. Just as the German policy shirks its responsibility and refers to the OPCW, although it knows that the OPCW will not act if you as a state do not make corresponding demands. An institution that is presented like a figurehead, according to the motto “Yes we are against chemical weapons, they are terrible” but then when push comes to shove, it becomes clear that this organization has no or only few means to actually act against it. But with the existence of this organization the states abdicate their responsibility and point to this organization. The policy of the figurehead. But a signboard, a name is nothing if it lacks the corresponding practice. 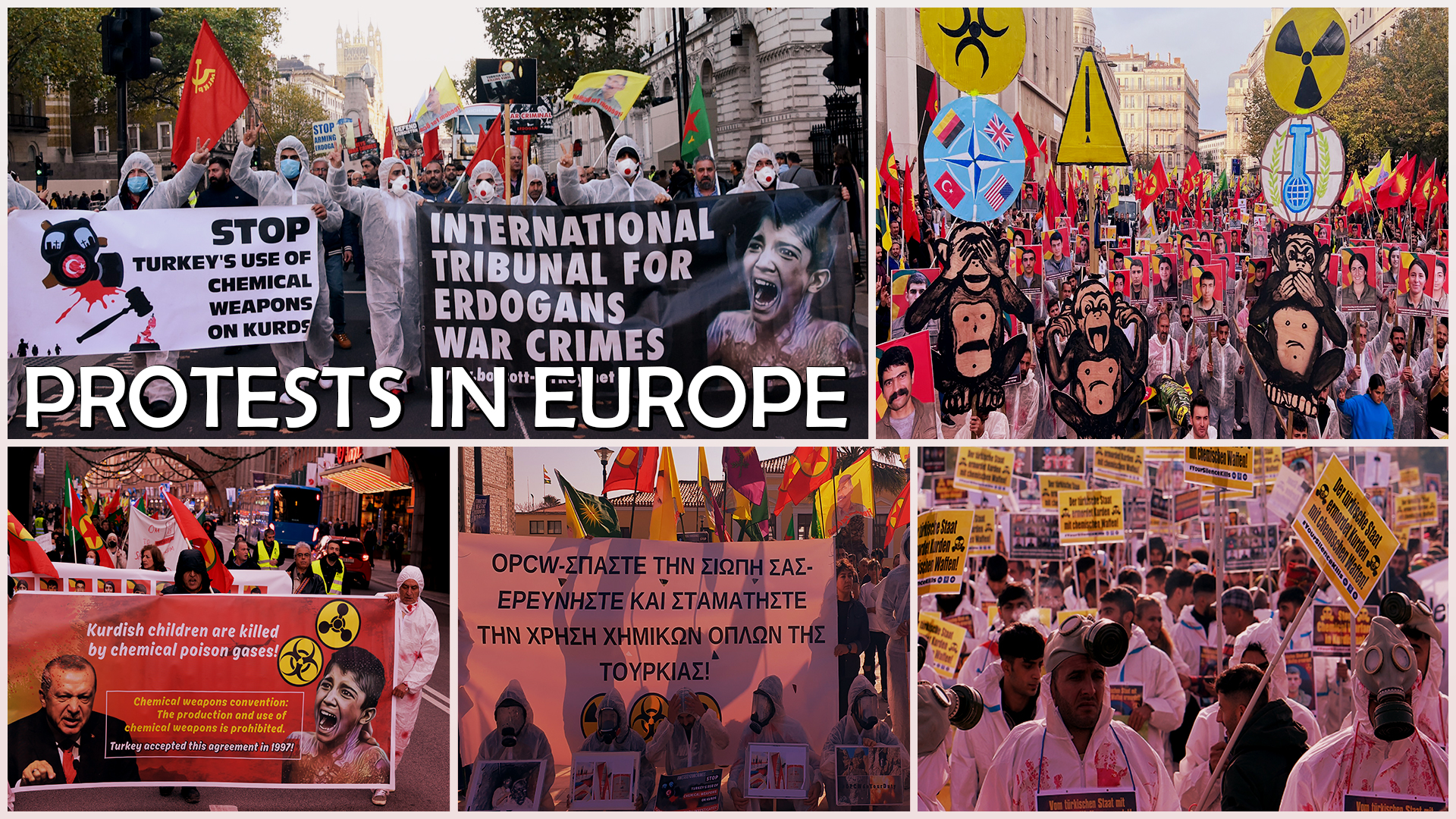 There were and are many attempts to motivate the OPCW to fulfill its task and duty and finally investigate the war crimes with chemical weapons in the south of Kurdistan, in the resistance areas of the guerrillas. However, the OPCW neither speaks out nor sends delegations. Protests by the youth movement in front of the OPCW building in The Hague led to the criminalization of the young activists, but not to the activation of the OPCW. Furthermore, regular protests take place in front of the OPCW.

Journalist Steve Sweeny also sought to submit his delegation report to the OPCW, as well as the samples and evidence collected, but the OPCW refused to accept these samples and listen to the journalist’s testimony. Steve Sweeney wanted to submit his report to the OPCW and hand over a letter demanding that an investigation team be sent to the region.

Most recently, IPPNW urged the OPCW to begin investigations in the affected regions of southern Kurdistan.